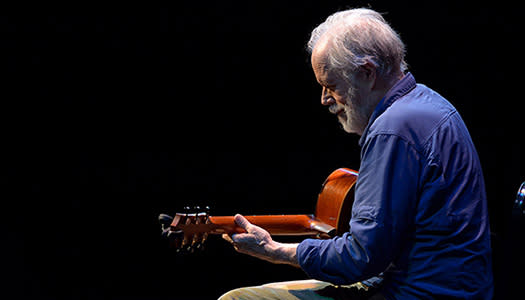 Acoustic guitarist Leo Kottke was born in Athens, Georgia, but left town after a year and a half. Raised in 12 different states, he absorbed a variety of musical influences as a child.

Kottke dropped out of the University of Missouri after a year to hitchhike across the country to South Carolina, then to New London and into the Navy, with his twelve string.

Discharged in 1964, he settled in the Twin Cities area and became a fixture at Minneapolis' Scholar Coffeehouse, which had been home to Bob Dylan and John Koerner. He issued his 1968 debut LP Twelve String Blues, recorded on a Viking quarter-inch tape recorder, for the Scholar's tiny Oblivion label.

After sending tapes to guitarist John Fahey, Kottke was signed to Fahey's Takoma label, releasing what has come to be called the Armadillo record. Fahey and his manager Denny Bruce soon secured a production deal for Kottke with Capitol Records.

Kottke's 1971 major-label debut, Mudlark, positioned him somewhat uneasily in the singer/songwriter vein, despite his own wishes to remain an instrumental performer. Still, despite arguments with label heads as well as with Bruce, Kottke flourished during his tenure on Capitol, as records like 1972's Greenhouse and 1973's live My Feet Are Smiling and Ice Water found him branching out with guest musicians and honing his guitar technique.