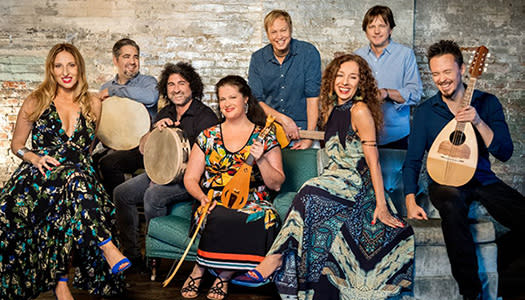 AMP & South Broadway Cultural Center are embarking on a new project to provide cultural programs for the schools in the SBCC neighborhood.

This program is not open to the general public, but for the local school kids. We'll be opening them up to homeschoolers in the future.

We will try to stream the shows live on Facebook, though, so feel free to join us online!

Called "...a brilliant outfit... who grab southern Italian traditional music by the neck and recast it in a dramatic style" by Songlines (UK), Newpoli is a unique group with a powerful sound and a 21st century take on their tradition that is beyond comparison.

With exciting interpretations of traditional and originals that draw deeply from one of the world's lesser-known music traditions, Newpoli is Italy's next inspiring interpreter of southern Italy's taranta tradition.

In concert you'll hear the tamburello, played by virtuoso Fabio Pirozzolo, pounding out the heartbeat of Newpoli's music, singers Carmen Marsico and Angela Rossi will start up a wild, frenetic dance, and you'll have a very hard time sitting still! The tempo is high, and the drama and passion can be heard in every note!

Thanks to the City of Albuquerque for funding support on this project.