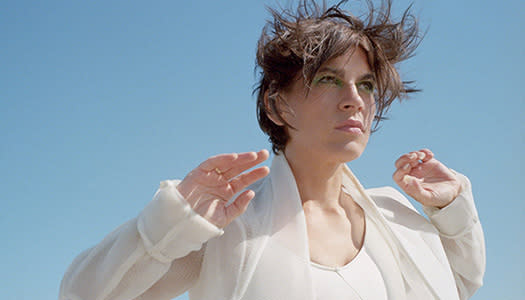 The early show at SITE is SOLD OUT!  There are still tickets to the later show at SITE and to the one at Chatter in Albuquerque.

This is a rescheduled show from Kaki's February show at SITE.  All tickets from the previous show will be automatically honored.

Kaki wowed us with her immersive The Neck is the Bridge to the Body at the Outpost in 2018.  She’s taken the technology from that show in new and exciting directions that allow them to be done in a more flexible way. We are excited to explore these options with her in cool art spaces in New Mexico, as well as doing some workshops and school visits with Kaki.

Kaki will perform her Modern Yesterdays piece inside the Helen Pashgian: Presences exhibit for a site-specific performance that will be a dramatic dialog between music and art. Attendance to each performance is limited to 60 people.

In 2015 Kaki launched "The Neck is a Bridge to the Body," a groundbreaking multimedia performance that toured extensively throughout the world, marking her first foray into multimedia and experimental theater. Kaki's multimedia project, DATA NOT FOUND, redefined her guitar as a tool for storytelling, exploring contemporary issues like A.I., the natural world, "big data" and personal empowerment. She continues this evolution with her latest program - MODERN YESTERDAYS - which we can't wait to see her perform!