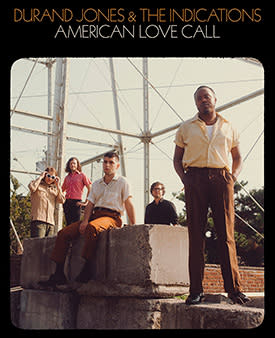 Durand Jones & The Indications aren't looking backwards. Helmed by foil vocalists in Durand Jones and drummer Aaron Frazer, the Indications conjure the dynamism of Jackie Wilson, Curtis Mayfield, and the Impressions. This young band of twenty-somethings are students of soul, including guitarist Blake Rhein, who moonlights doing research for The Numero Group. Even with that background, and an aesthetic steeped in the golden, strings-infused dreaminess of early 70s soul, the Indications are planted firmly in the present, with the urgency of this moment in time.

On American Love Call, Durand Jones & the Indications' soulful sophomore LP, the band reckons with how to balance love and fury of modern day America. A fierce, fully-formed thesis, American Love Call is as grand and cinematic as it is focused on fleeting details.

Recorded for $452.11, including a case of beer, the Indications' 2016 self-titled debut was the product of five friends who met as students at Indiana University in Bloomington, Indiana. Having met in 2012, the project was initially intended as a standalone recording project, with vocalist Jones, a native of rural Louisiana, joined by Frazer, Rhein, bassist Kyle Houpt, and keyboardist Steve Okonski. The album was released by renowned Midwest soul label Colemine Records, and quickly picked up steam on the back of the band's booming live show and the enthusiastic recommendation of independent record store clerks across the country—who moved thousands of copies by simply playing the hell out of the LP in their shops for their discerning customers. 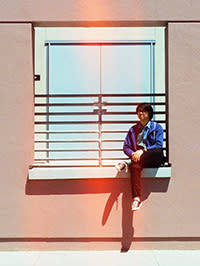 Editing films, videos, and other multimedia by day, and making music under the name Ginger Root by night, Cameron Lew fronts a sounds that can be described as:

Combining elements from contemporaries like Toro Y Moi, Vulfpeck, Jay Som, and Mocky with the influences of the days of Stax and Philly Soul, Ginger Root offers a fresh take on the ever evolving Bedroom Pop scene.

"If you're tuned into medicinal herbs, then you know ginger root has plenty of feel-good benefits. The same can be said for the indie soul project that shares the name."
—OC Weekly