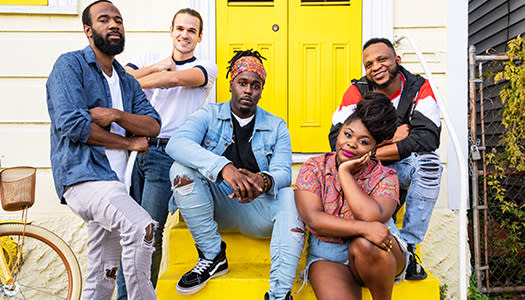 Coming from New Orleans, Tank and the Bangas are surrounded by plenty of grand musical traditions. And the five-piece group has a rare knack for combining various musical styles—fiery soul, deft hip-hop, deep-groove R&B and subtle jazz—into one dazzling, cohesive whole that evokes the scope of New Orleans music while retaining a distinctive feel all its own.

"It's music that can't really be put in a box," says singer and poet Tarriona "Tank" Ball. She fronts the band with vivid charisma that helped Tank and the Bangas win NPR's 2017 Tiny Desk Concert Contest by unanimous acclaim, standing out among 6,000 entrants because of what Bob Boilen called "the depth of their lyricism and the versatility of their players." Those same qualities also attracted the attention of Verve Records, which has signed the band.

What started as a loose collaboration at an open-mic night in 2011 has grown into a mesmerizing musical force that's only picking up speed. After a featured set at the New Orleans Jazz & Heritage Festival early in the band's career, the musicians built a reputation outside their hometown by grinding it out on the road, honing their live show and releasing the 2013 album Think Tank, all the while converting audiences into passionate fans and garnering critical acclaim, from the New Orleans Advocate to the New York Times. "It made us work hard," Ball says of playing Jazz Fest. "It made us want to feel deserving of it." Their first major-label album, Green Balloon, was released in May. 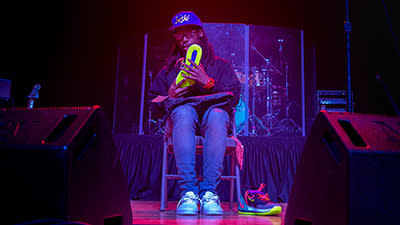 The emergent New Orleans rapper Alfred Banks has garnered acclaim from some of rap's most esteemed publications. In addition to being named one of Complex's 10 upcoming New Orleans MCs, Banks has been featured prominently on HipHopDx, Okayplayer & on DJBooth's list of Top Indie rappers from Louisiana. Banks has also made headway in Europe, performing at the Reeperbahn Festival in Germany and starring in a Volkswagen ad campaign featuring his song "HomeComing." Alfred's song "UnderDogCentral" can be heard in the Netflix movie "Burning Sands," which was executive-produced by Common. Banks's third album, The Beautiful, was inspired by his brother's struggle with mental illness and his eventual suicide. The National Alliance of Mental Illness (NAMI) & UnMaskNola both took notice of Banks's music and its focus on mental-health awareness, and partnered with him on promotional efforts for The Beautiful.