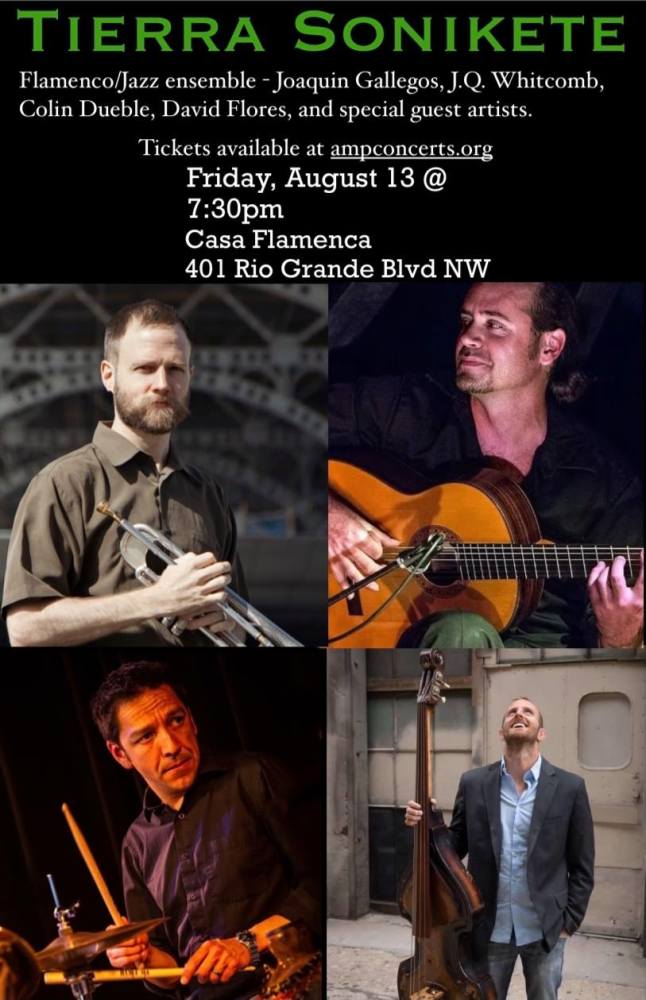 Tierra Sonikete is a flamenco/jazz/Latin funk ensemble led by guitarist Joaquin Gallegos and trumpet player J.Q. Whitcomb. The group seamlessly weaves grooves of flamenco, jazz, Brazilian, and funk music. There is a heavy emphasis on improvisation, and the group plays original material as well as homages to the great masters such as Miles Davis and Paco de Lucia. Tierra Sonikete has been wowing audiences in Santa Fe and Harlem for 9 years. This is their first Albuquerque performance.

Joaquin Gallegos was born in Santa Fe, New Mexico but has made Andalucia his second home—living, studying and performing there as well as in Latin America and around the United States.  He lived among gypsy clans in Sacromonte, Granada, learning the art of accompanying cante and baile.  Some of Joaquin's most important maestros have been Chuscales, Manolo Sanlucar, El Viejin, Emilio Maya and Antón Jimenez. His second album, Nuevos Comienzos, was released in 2015 and has received critical acclaim for its composition, innovation, and technical virtuosity. Joaquin has competed in three Flamenco guitar competitions, including the prestigious Concurso Nacional de Córdoba in 2019, winning 1st prize in the 2002 EXPO at the Albuquerque International Flamenco Festival. His technical expression, rhythmic sensibility and prolific composing abilities have made Joaquin a sought after guitarist for solo performances, accompaniment for flamenco artists such as, Lakshmi Basile, Kina Mendez, Nino de los Reyes, jazz, world and soul music collaborations with artists such as Rahim AlHaj, Consuelo Luz, and as a composer of soundtracks for films.

New York City-based trumpet player, composer, and educator J.Q. Whitcomb has been playing the trumpet since the age of ten. He attended Oberlin for bachelor degrees in Jazz Trumpet and Chinese language, then moved to mainland China where he worked for 8 years in the bustling Shanghai jazz scene. After returning to the U.S. in 2010, he moved to New York City and earned a masters degree in jazz at The Juilliard School, which he completed in May 2017. He has released two albums with his quintet Five Below: Airports (2010) and Tales of Enchantment (2014).