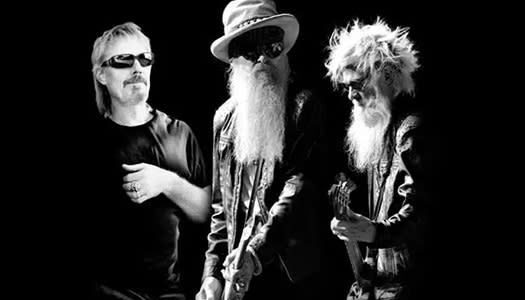 Tickets cost $66 and $88 (including all service charges). They are also available by phone through Hold My Ticket at 505-886-1251. The higher priced tickets get you access to the front section of the park.

It was in Houston in the waning days of 1969 that ZZ Top, a.k.a. "That Little Ol' Band From Texas,"  coalesced from the core of two rival bands, Billy's Moving Sidewalks and Frank and Dusty's American Blues. The new group went on to record the appropriately titled ZZ Top's First Album and Rio Grande Mud that reflected their strong blues roots.

Their third, 1973's Tres Hombres, catapulted them to national attention with the hit "La Grange," still one of the band's signature pieces today. The song is unabashed elemental boogie, celebrating the institution that came to be known as "the best little whorehouse in Texas." Their next hit was "Tush," a song about, well, let's just say the pursuit of "the good life" that was featured on their Fandango! album, released in 1975.

The band's momentum and success, built during its first decade, culminated in the legendary "World Wide Texas Tour," a production that included a longhorn steer, a buffalo, buzzards, rattlesnakes and a Texas-shaped stage.  As a touring unit, they've been without peer over the years, having performed before millions of fans through North America on numerous epochal tours as well as overseas where they've enthralled audiences from Slovenia to Argentina, from Australia to Sweden, from Russia to Japan and most points in between. Their iconography—beards, cars, girls and that magic keychain—seems to transcend all bounds of geography and language.

They have sold millions of records, have been officially designated as Heroes of The State of Texas, have been referenced in countless cartoons and sitcoms and are true rock icons but, against all odds, they're really just doing what they've always done. They're real and they're surreal and they're ZZ Top.