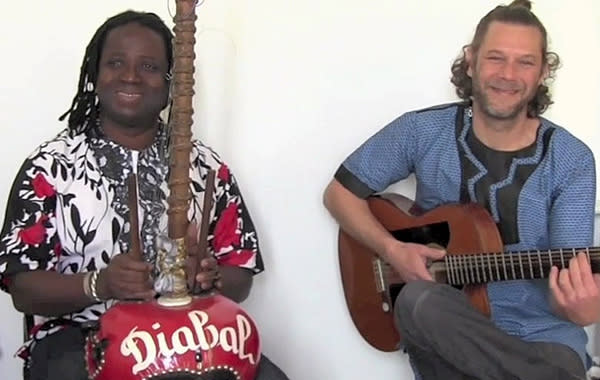 Prince Diabaté and Edouard Chaize Diabaté, two prodigious talents from different continents, weave together strands from their diverse musical experience to create a complex dynamic dialogue on stage. Inviting us along, they embark on a captivating journey combining traditional and contemporary rhythms based on Prince's Manden musical roots. To this they layer in textures from the Fouta and Pulaar regions of Guinea and Northern Mali along with Flamenco, Reggae and Cuban influences. They also punctuate their performance with brief explanations of the history and significance of the music plus descriptions of the instruments.

Prince Diabaté hails from a prominent Malinke family from Guinea, West Africa. He learned his art from his father, Djeli Sory Diabaté. Breaking with tradition, Djeli Sory also taught Prince's mother to play kora and the young boy became an exceptionally early starter by accompanying his parents to their concerts throughout West Africa. At the age of nine he caught the attention of the former President of Guinea, the late Sékou Touré, who enrolled him into the national music school.

Considered to be one of the leading kora players of his generation, Prince Diabaté brings not only total mastery over his ancestral tradition, but a commitment to renew it through fresh ideas and exchanges with musicians from many cultures. His years in the USA have produced collaborations with artists and groups as diverse as The New Mexico Symphony Orchestra, Adam del Monte (Flamenco), Paul Livingstone (sitar) and Grammy winners Ozomatli (Hip-Hop/Latin rock). The musically adventurous griot has incorporated reggae, rap and blues into his work and lately has adapted the music of the Wassolou people to his repertoire, which he plays self-taught on the kamelen n'goni. The result is entirely his own creation: a fresh, powerful brand of twenty-first century Manden music, which remains strongly rooted in traditional codes and references. Currently based in France, he has produced three studio albums with a fourth due for release in 2022.

Edouard Chaize Diabaté is a multi-instrumentalist, singer and occasional poet from Toulouse, France. A Jazz graduate from the Music Halle school in Toulouse, Edouard's travels have taken him to India, South America, Cuba, Reunion and West Africa. Profoundly curious about the world, he has explored traditional and contemporary global rhythms, delighting in their complexity and the challenges they present. His professional collaboration with his "brother" Prince Diabaté, sustained over eight years, has led to a true friendship as they traverse new musical frontiers together. Every year he accompanies Prince Diabaté to Guinea to further develop his guitar skills and to help him with the construction of his international music school, The Prince Diabaté Music Academy.