Matt Andersen has logged countless miles following little white lines down the highway, crossed vast oceans, and left audiences around the world forever changed by his powerful, soul-baring song writing. Those travels have been fueled by a profound devotion to music, a journey that began in New Brunswick with six steel strings. Since then, Andersen's work has reached spectacular heights through rich arrangements and fruitful collaboration, but at its core, one musical relationship has remained at the very heart of the whole affair. For his latest long-player, the laid-bare House to House, Andersen brings it all back home with the sweet chemistry that only a voice and guitar alone, together, can conjure.

When Andersen steps on stage, he brings a lifetime of music to every note he plays. His presence is informed by decades of cutting his teeth in dusty clubs, dim-lit bars, and grand theatres all over the world, delivering soulful performances that run the gamut from intimate to wall-shaking. In the studio, he's always brought the same attention to detail and commitment to craft as he has to his live show, and the result—a multi-faceted and poignant body of work—has led him to amass over 18 million streams on Spotify and 18 million views on YouTube. 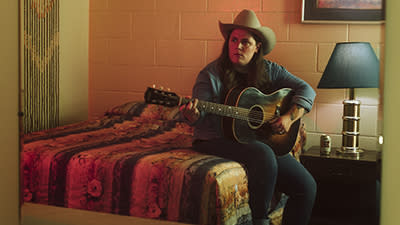 Unapologetically genuine, wry, and soft-hearted, Mariel Buckley has planted her flag firmly as a songwriter who’s in it for the long haul. She aims to find herself squarely on the fringes and exactly where she belongs: singing and writing songs for the underdog. And that’s exactly where her new album Everywhere I Used to Be lives.

Born and raised on the prairies in a conservative core, Buckley spent most of her youth playing hockey, getting into trouble and writing it all down. After dabbling in guitar for near a decade, she took up some bar gigs, playing mostly traditional country music. Buckley began writing original music in her early twenties and found a natural comfort in speaking her mind through song. After several years of honing her craft on and off the stage, she began seeing larger support slots—k.d. Lang notably saying: "this kid has a big future."