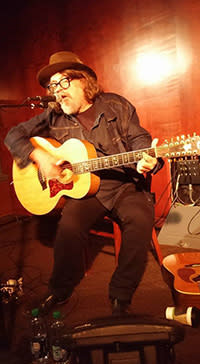 Peter Case has always been a pioneer. Genre-tripping through punk with The Nerves ("Hanging On The Telephone"), new wave/power pop with The Plimsouls ("A Million Miles Away") and Americana with his Grammy-nominated, self-titled solo debut. It is a career that is still going strong over 40 years later on the strength of his exceptional songwriting.

His latest album, On The Way Downtown: Recorded Live On FolkScene, is a snapshot from nearly twenty years ago when Case sat still long enough for the airwaves to catch up to him. The album captures material from two live performances on the highly influential KPFK (Los Angeles) syndicated radio program in 1998 and 2000. The first half features material from his then newly-released Full Service, No Waiting—an album New York magazine called "stunning." The latter half contains material from 2000's Flying Saucer Blues, as well as songs from his earlier releases. Plus, some choice covers appear as well. Both intimate acoustic sets have remained unheard since their original broadcasts.

With music and lyrics reminiscent of Leonard Cohen and Steve Earle and a style at once intricate and eloquent, Sean Healen is rapidly achieving the national stage. A long-time resident of New Mexico, his album Floodplain was awarded Best Rock CD 2009 at the New Mexico Music Awards. Sean is currently in the studio recording 52 new songs that will be featured on KBAC as Healen's New 52. A new song a week will be talked about and played for 52 weeks, starting October 2018.