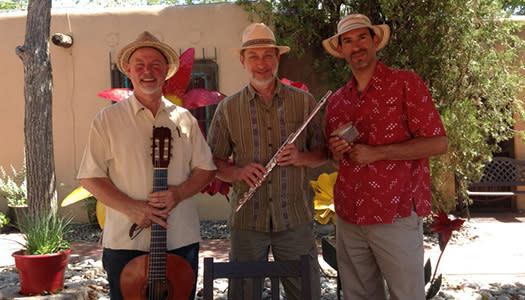 Dan studied music at the Conservatory of Music in Kansas City, music theory with John Elliot and guitar with Michael Anthony. Dan was a contract bass player in Kansas City through the 1970s playing in studios, clubs, pit orchestras and on the road. From 1982 until 2010, Dan played guitar in Albuquerque, mostly with the Brazilian groups Sylvia Lazo, Toda Bossa and Saudade. From 2010 until 2013, Dan moved to Oregon, where he played as a soloist and with various groups. In 2013, he moved back to Albuquerque and continued performing as a soloist in fine restaurants, wineries, private clubs and at the UNM Cancer Center for the UNMH Arts-In-Medicine program that provides music to patients and staff.

A mainstay of the New Mexico music community as both a performer and educator, Bob Gusch adds his talents to his current projects, which include Saudade, Bobcats, Uniquity and Flambeaux. Bob specializes in the woodwinds, playing alto, tenor, baritone sax, flute, with an emphasis on the clarinet. A drummer at heart, a strong sense of rhythm is always present in his playing.