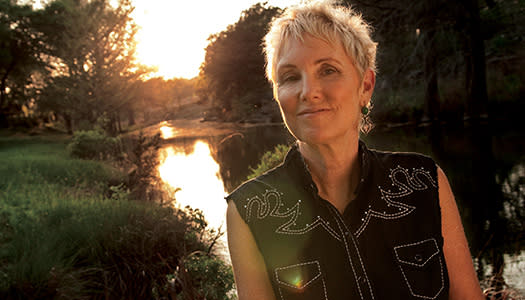 Eliza Gilkyson is a twice-Grammy-nominated (2006/2015) singer-songwriter and activist who is one of the most respected musicians in Folk, Roots and Americana circles. Her songs have been covered by Joan Baez, Bob Geldof, Tom Rush and Rosanne Cash, and have appeared in films, PBS specials and on prime-time TV.  A member of the Austin Music Hall of Fame, and a recent inductee into the Austin Songwriter Hall of Fame, she has won countless Folk Alliance and Austin Music awards, including 2014's Songwriter of the Year. Eliza's music has always offered a vivid reflection of the times we live in, full of joys and sorrows, each song a window into a life of struggle and triumph in a world she feels is "poised on the edge of moral, economic and environmental bankruptcy."

Eliza's 2018 release is SECULARIA, a collection of spiritually charged songs that do not fit within the parameters of traditional religious beliefs but challenge us to respect all life and be accountable for our actions in such perilous times. The new collection features a stunning performance with the acclaimed Tosca String Quartet, cameos with Shawn Colvin, gospel singer Sam Butler, and a duet with her friend the late Jimmy LaFave, as well as several songs adapted from poetry by her grandmother Phoebe Hunter Gilkyson, who co-wrote with Eliza's father, folksinger Terry Gilkyson.

On stage, Eliza presents a vibrant spontaneous mix of storytelling with self-effacing humor and tenderness, within a wide-ranging spectrum of human experience, from intimate love songs to political diatribe. At this performance, she will be accompanied by Jim Henry.