Time: 7:30pm     Day: Thursday     Doors: 6:30pm     Ages: All Ages
This concert is being postponed yet again - into January of 2021. We never put the tickets on sale at the new venue, so there are no tickets to worry about. We'll let people know as soon as we have a new date and have a reasonable sense that it will work!
This Event Has Ended
Tags: Albuquerque alibi AMP Concerts guitar Hawaiian NHCC 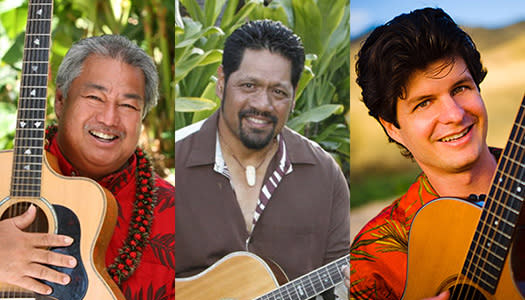 This show was rescheduled from March 14 at South Broadway Cultural Center.
Since we are moving theaters, all the tickets to the previous show will automatically be refunded.

The NHCC is not able to put tickets to new shows on sale during the shutdown, so tickets will go on sale sometime in the future.  All previous buyers will be notified and given an opportunity to buy tickets before we put them on sale to the general public.

"Kahumoku was an affable raconteur, mixing his dialogue with passionate renderings of material."
—Los Angeles Times

A talented multi-instrumentalist, Nathan Aweau has been part of such award-winning groups as HAPA, Ka'eo, and The Ali'i. His seven solo CDs have won him multiple Na Hoku Awards, including Male Vocalist of the Year (the only person to have won 3 times), Song of the Year (twice), and Island Album of the Year, among others.

"Nathan, on electric bass and acoustic guitar, shows an advanced understanding of harmony and orchestration... his singing style is effortless."
—New York Times

Recognized as one of Hawaii's most versatile musicians, Jeff Peterson is at the heart of the Hawaiian music scene today. His passion for the guitar has allowed him to shine as a solo artist and has given him the opportunity to collaborate with a wide variety of artists from Hawaii, across the US, and abroad. His focus on Slack Key guitar, classical, and jazz music has allowed him to develop a unique and transcendent voice on the guitar while being deeply rooted in the traditions of his Hawaiian heritage.

Born on the Island of Maui, Jeff Peterson grew up on the slopes of Haleakala where he was introduced to the rich heritage of Hawaiian music by his father, a paniolo, or Hawaiian cowboy, on the Haleakala Ranch.

"Brilliant... Peterson raises the bar a few notches in both slack key and jazz."
—Honolulu Advertiser