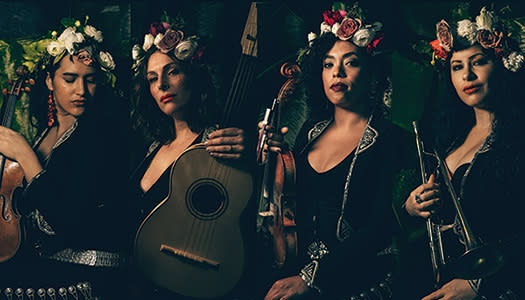 Latin Grammy Winners Flor de Toloache make New York City history as its first and only All­-Women Mariachi Group. Founded in 2008, Flor de Toloache is led by singers Mireya I. Ramos (founder) & Shae Fiol (founding member). Reminiscent of the early days of mariachi, the group started as a trio, Harp, Violin and Vihuela. Today, Flor De Toloache's members hail from diverse cultural backgrounds such as Mexico, Puerto Rico, Dominican Republic, Cuba, Australia, Colombia, Germany, Italy and the United States. This defines their unique flavor and sound. The result of this cultural bouquet is an edgy, versatile and fresh take on traditional Mexican music. They coalesce as would a band of sisters, with a grace and vibrant beauty that casts a spell over their audiences not unlike the legendary Toloache flower still being used in Mexico as a love potion. While working to preserve centuries old traditions of Mariachi, their melange of the traditional and the modern pushes the boundaries of the genre and brings Mariachi music to new audiences.

"There should be fireworks named after this band, for all the intensity and color and life that bursts forth from Flor de Toloache."
—Marisa Arbona-Ruiz, NPR's First Listen 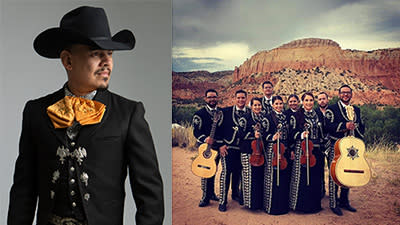 Carlos Medina composes and sings original music based on his life experiences.  His most recent Mariachi album, El Cantador, features several original songs including "No Le Digan," which is the basis of an award winning music video produced by Meow Wolf. Medina started performing at an early age with his family band and has dedicated his life to music.  Carlos performs throughout the United States with his band, trio and tonight he is joined by Mariachi Calor, New Mexico's premier Mariachi, under the direction of Darren Lee Cordova.