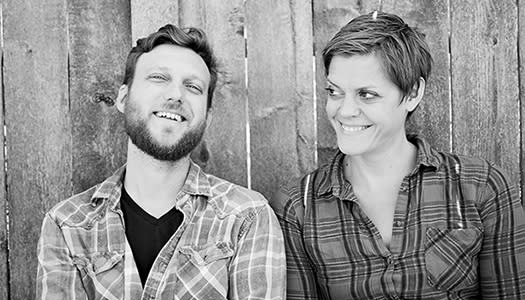 The Rough & Tumble are as easy to detect as a stray dog on your doorstep—and as difficult to send home. The dumpster-folk, thriftstore-Americana duo, consisting of Mallory Graham & Scott Tyler, have been hobbling around the country in their 16' camper since 2015, when their Nashville landlord left them without heat during an ice storm for 12 days. Then she tried to hike the rent. Enough was enough, and The Rough & Tumble gave their 30 days notice at their jobs and their lease, sold most of what they owned, and hopped into their shoddily built camper, in spite of the lot salesman's advice. They picked up a couple of actual strays along the way—two 100-lb. dogs, Puddle & Magpie Mae—and have been making themselves at home in living rooms, bars, theaters, and festivals across the country. They've been recognized as a Feature Showcase Artist at 2018 SERFA, and a 2018 honorable mention for the Listening Room Network.

Even at their start in 2011, The Rough & Tumble are collectors.  Trinkets, instruments, stories shoved in cupholders, and scraps of paper sticking out of old books they never planned to read, the duo couldn't resist filling their pockets with tiny things that may be useful down the road. Until they hit the road. Limited in space, The Rough & Tumble are a new kind of collector: songwriting with illustration, and arranging each song with a menagerie of instruments, ranging from acoustic guitars to mailbox snares to a banjulele. "Their Americana music is restorative, their performance highly entertaining, their orchestra of unusual instruments intriguing, and... jokes and stories are worthy of an HBO special." (Linda Bolton, Cozy Cabin House Concerts).

The stray folkies are as industrious as they are scrappy, releasing five EPs and two albums in their 8 years.  The Rough & Tumble's 2018 release We Made Ourselves a Home When We Didn't Know, brought the listener to the road and the road to their home, an album "as cozy, comfortable and inviting as a well-worn couch." (Bill Kopp, Mountain Xpress). This is in addition to their weekly livecast, a monthly blog, a Cook & Color Book, a food blog, 2018 SERFA Official Showcase Artist, and playing upwards of 150 shows a year.

Written during a time of doggedly trying despite the odds and a self-proclaimed "year of honesty," The Rough & Tumble released their new studio album Howling Back at the Wounded Dog on September 6, 2019.