Time: 7:30pm     Day: Wednesday     Doors: 7:00pm     Ages: All Ages
Due to the ongoing COVID-19 pandemic crisis we have had to postpone this show. We are currently working on the new date and all tickets bought will be honored at the newly scheduled date.

If you are unable to attend we can offer a refund at anytime.

Thank you for your patience and support as things are changing daily.
We look forward to bringing you music again soon.
This Event Has Ended
Tags: alibi AMP Concerts blues guitar Lensic Santa Fe 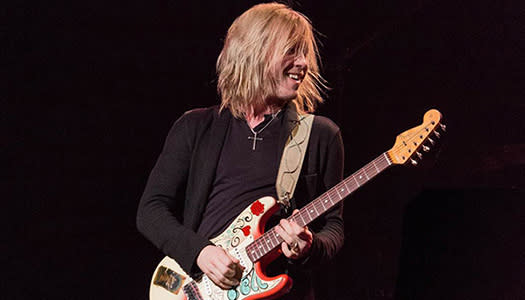 There are few artists whose names are synonymous with one instrument and how it's played in service to an entire genre.

Utter the phrase "young blues rock guitarist" within earshot of anyone with even a cursory knowledge of the modern musical vanguard and the first name they are most likely to respond with will be Kenny Wayne Shepherd. The Louisiana-born axeman and songsmith has sold millions of albums while throwing singles into the Top 10, shining a light on the rich blues of the past and forging ahead with his own modern twist on a classic sound he has embodied since his teens.

Shepherd has established himself as an immensely popular recording artist, a consistently in-demand live act, and an influential force in a worldwide resurgence of interest in the blues. He continues to create genre-defining blues-infused rock n' roll, building an enviable resume as an accomplished recording artist, a riveting live performer and one of the most talented and distinctive guitarists of his generation. Shepherd has received five Grammy nominations, two Billboard Music Awards, as well as a pair of Orville H. Gibson awards, the Blues Foundation's Keeping The Blues Alive award and two Blues Music awards. He's had seven #1 blues albums and a string of #1 mainstream rock singles. His latest album, 2019's The Traveler, "continues Shepherd's trajectory of quality. The diversity in his musical approach, songwriting consistency, organic production, and passionate performances place it over and above anything else in his catalog to date." (All Music Guide)