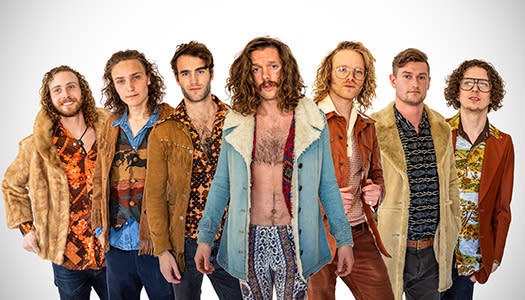 Register for the event and we'll send you updates if there are any schedule changes, as well as info on future free programs in the Hear This! Emerging Artist Free Concert Series and other events around Santa Fe and Albuquerque.

Bombargo is a Canadian based international touring band that drops a vibrant splash of soul over their distinctive "vintage-pop" sound. Well known for bringing unrivaled energy to the stage with sing-along anthems, double-brother harmonies and a powerful message that combined make for one of the most captivating live shows ever! Frontman Nathan Thoen's passionate conviction and Jagger-like dance moves even impressed billionaire and music industry icon Sir Richard Branson, quoting "I haven't seen this type of energy since The Rolling Stones!"—and he would know, having personally signed The Rolling Stones to Virgin Records.

The band began with lead singer Nathan Thoen and guitarist Spencer Chilliak after the two spontaneously met and drove 16 hours to attend Sasquatch Music Festival, where they became inspired to start a band. The duo wrote their debut single "Let It Grow" during their very first writing session and as part of Bombargo's debut EP Back on Main which would go on to be included in "The Top 10 Best Saskatchewan Albums of 2015" by SaskMusic. This further inspired them to continue writing, touring, and release their first full-length album titled We Are Bombargo. The group has since evolved into a 7-piece touring band adding Nathan's brother Anthony Thoen on guitar, additional brothers Matt and Sammy Folkersen on keys and bass respectively, Connor Newton on saxophone, and Niall Cubbon on drums.