This show is sponsored by McLin Goldman. 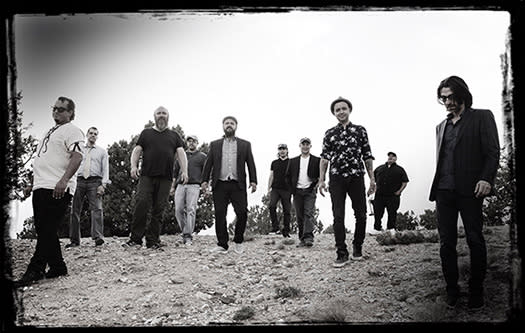 Just named Santa Fe's Best Band in the 2020 Santa Fe Reporter Best of Santa Fe contest, Nosotros is one of the most recognizable Latin bands in the Southwest United States. They have twice been featured on NPR's Alt Latino, twice been named winners in the prestigious John Lennon Songwriting Competition, been awarded 12 New Mexico Music Awards and have shared the stage with some of the biggest names in music.

This 9-piece Latin music powerhouse seamlessly combines Latin rhythms with elements of Rock, Salsa, Jazz and Cumbia, creating an original sound that is unmistakably Nosotros. But M.E. Schenck of Hyperactive Music Magazine may have interpreted their sound best by saying "Nosotros' music is not to be explained, it is to be felt in the pit of our souls."

Nosotros has been drawing music lovers to their music for over 20 years. What began as a guitar trio in 1994 quickly took on a life of its own, and developed and grew into something that no one could have predicted.

Nosotros continues to perform and write music that is relevant to our ever-changing world. Through the years Nosotros has evolved, morphed and changed but one thing remains the same, their music will always be felt in the pit of our souls. 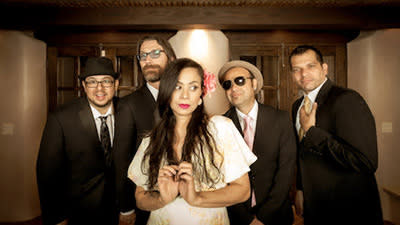 Nohe & Sus Santos (Nohe & Her Saints) have not sat on their hands during the pandemic. While they were not able to return to stages across the country, they released their debut CD, the at once subtle and intense—and completely sublime—Tempestad (Santo Records/Avokado Artists/distributed by Casete) and a number of singles, including their original take of the Christmas classic "Feliz Navidad," "La Nave Del Ovido" and an acoustic version of the title track of their CD "Tempestad" (with special guest Jordan Wax of Lone Pinon). Their music will be heard in the feature length film "¿Dónde Está La Cigueña?" ("Where Is The Stork?," September 2021). And the band's multi-talented vocalist and namesake Nohelia Sosa has a role in the hilarious feature film "Half Brothers."

Nohe & Sus Santos is a five-piece band that mixes Spanish and English vocals with the musical traditions, rhythms and sounds of the Americas, incorporating Alt-Rock en Espanol, Cumbia, Pop grooves and beyond! The group has shared stages with the diverse likes of Ozomatli, Red Pears, Making Movies, and Samantha Fish, delivering a Latinx vibe full of soul, passion and a good dose of attitude that leaves dancing crowds wanting more. It has the Albuquerque Journal enthusing that the band is "out of the ordinary."