Tank and The Bangas don't go anywhere quietly. Sitting around a dimly lit room in London's neighborhood of Camden Town, vocalist Tank Ball, bassist Norman Spence, drummer Joshua Johnson and saxophonist Albert Allenback can't go mere minutes without bursting into play fights, or talking over one another, or laughing from their deepest guts. They are a beacon of life. And it's that life that you hear in their music. That's what makes them one of the most thrilling, unpredictable and sonically diverse bands on the planet; a unit where jazz meets hip-hop, soul meets rock, and funk is the beating heart of everything they do.

Their new album Green Balloon is their first release now they're signed to major label Verve Forecast—a deal that came after they won NPR's Tiny Desk Contest in 2017, beating out hundreds of other acts. They admit that it was a moment that has entirely changed their lives. This resulting record is set to prove their pizazz and their staying power. It's everything they've worked so hard for so far.

Green Balloon is a multi-faceted title for their first full-length release since Think Tank in 2013. Think Tank was a case of throwing all their creative juices and ideas to at the wall to see what stuck. It was a DIY project. This album process was a world apart from that. "Green Balloon is a sister to Think Tank," says Tank. "Think Tank was 12, and Green Balloon is 16 and having sex. She's out there." Made in New Orleans, Los Angeles, London and Florida, the band's newfound critical acclaim and global notoriety meant they were able to call upon producers such as Jack Splash, Mark Batson, Zaytoven, Louie Lastic and Robert Glasper. Some of these names were on their bucket wishlist, others were new discoveries. "It was truly a dream to us. We're so lucky," says Tank. 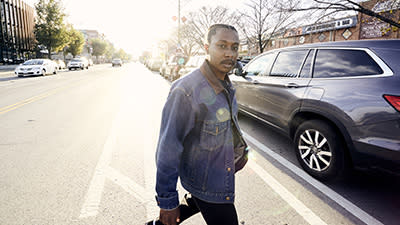 McKinley Dixon spent much of his childhood on the move. Born in Annapolis, Maryland in 1995, he shuttled back and forth between the DMV and Jamaica, Queens, and it was those singular New York experiences that really inspired him. He felt a kinship with the borough, a place that wasn't quite home but felt more like it; the faces there looked like his in a way that just wasn't true of Maryland. "It gave me kind of this sense of longing that really jump started my thinking about escapism through music," he says.

The idea of longing and escape is central to his music, especially his forthcoming album, announcing this spring on City Slang Records. Pulling references from Toni Morrison in "Sun, I Rise," the first track out now, the writer Dixon has described as "the greatest rapper ever." Morrison's novels looked into American history to locate eruptions of longing and escape with the beautiful sweep and precision of her prose. That's the energy Dixon tries to channel on this album.