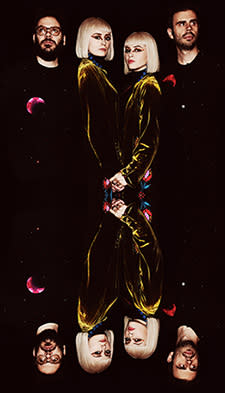 Fronted by the enchanting Jess Wolfe and Holly Laessig, Lucius has drawn acclaim for powerful songs showcasing taut hooks, along with their mesmerizing stage presence and bold visual aesthetics. The New York Times described Wolfe and Laessig's vocals as being "especially gorgeous," while Rolling Stone says Lucius is "powerful enough to knock you over." Talented multi-instrumentalists Peter Lalish and Dan Molad round out the group.

After wrapping up back-up singer duties on the Roger Waters arena-conquering Us + Them tour, performing over 170 shows in two years around the world, 2019 finds Lucius back together for an intimate acoustic tour in support of last year's critically-acclaimed 10-track acoustic album, NUDES.

Wolfe and Laessig have become in-demand collaborators on their own—singing on albums for artists including Waters, John Legend, Nathaniel Rateliff, Ingrid Michaelson, The War on Drugs and Kurt Vile.

"Amidst nearly every performance over the past few years, we've had the opportunity to strip away everything—be it at the center of the crowd, on stage around one microphone, or in tiny, unexpected rooms around the world—all in an effort to share and create an intimate, heartfelt connection with our audience. It is these moments that have inspired our newest recording project, NUDES. Recorded over two days at New York’s legendary Electric Lady Studios, NUDES is a collection of acoustic songs: new, from our back catalog—reimagined, and covers we've always wanted to record. It is a record paying homage to what has been... and a hint at what's to come." 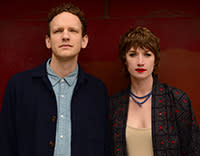 Pure Bathing Culture's Sarah Versprille and Daniel Hindman first met while college students in New Jersey. They moved to Portland, Oregon in 2011, and played in the group Vetiver. Around 2012 they began playing live shows as Pure Bathing Culture, and released their first full-length album on Partisan Records in 2013. Their second album, Pray for Rain, was released in 2015. The Guardian said: "[T]heir strength with melodies that will keep listeners coming back...they prove they have a sparklingly sure touch for the purest kind of guitar pop, with a song whose arpeggiated guitar line is a smile set to music." In 2018, they covered the Blue Nile's 1989 album Hats in its entirety for Turntable Kitchen's Sounds Delicious series .Pure Bathing Culture is currently working on their third full-length record.