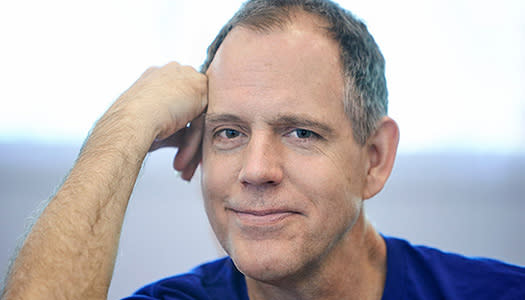 This show was rescheduled from March 13 at the Outpost. All tickets to the original concert will be honored.

More than three decades into his career, singer/songwriter David Wilcox continues to push himself, just as he always has. Wilcox, by so many measures, is a quintessential folk singer, telling stories full of heart, humor, and hope, substance, searching, and style. His innate sense of adventure and authenticity is why critics and colleagues, alike, have always praised not just his artistry, but his humanity, as well.

That's not by accident; it's very much by design. It's the result of a man giving himself over in gratitude and service to something bigger than himself. "I'm grateful to music," he says. "I have a life that feels deeply good, but when I started playing music, nothing in my life felt that good. I started to write songs because I wanted to find a way to make my life feel as good as I felt when I heard a great song. I don't think I'd be alive now if it had not been for music."

An early '80s move to Warren Wilson College in North Carolina set his wheels in motion, as he started playing guitar and writing songs, processing his own inner workings and accessing his own inner wisdom. In 1987, within a couple of years of graduating, Wilcox had released his first independent album, The Nightshift Watchman. A year later, he won the prestigious Kerrville Folk Festival New Folk Award and, in 1989, he signed with A&M Records, selling more than 100,000 copies of his A&M debut, How Did You Find Me Here.

In the 30 years and more than 20 records since—whether with a major label, an indie company, or his own imprint—Wilcox has continued to hone his craft, pairing thoughtful insights with his warm baritone, open tunings, and deft technique.