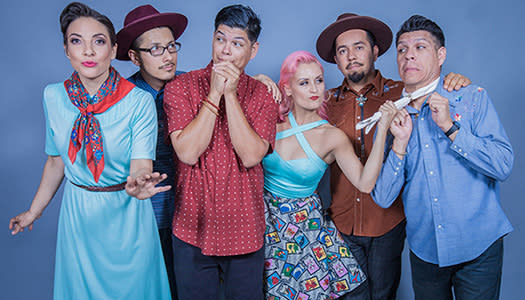 This concert will be specifically recorded for the annual La Cosecha Bilingual Education Conference, to be held virtually from Santa Fe November 4 to 7.   Members of Las Cafeteras will be doing workshops at La Cosecha throughout the day, and participating in the concert stream that evening.  The concert will be on Zoom, with a mix of live interaction with the band and pre-recorded concert footage.

Click here for the Zoom session for watching this program live at 6 pm (MST).

Born and raised east of the Los Angeles river, Las Cafeteras are remixing roots music and telling modern day stories. Las Cafeteras create a vibrant musical fusion with a unique East LA sound and positive message. Their Afro-Mexican beats, rhythms, and rhymes deliver inspiring lyrics that document stories of a community seeking love and justice in the concrete jungle of Los Angeles. Using traditional Son Jarocho instruments like the jarana, requinto, quijada (donkey jawbone) and tarima (a wooden platform), Las Cafeteras sing in English, Spanish, and Spanglish and add a remix of sounds, from rock to hip-hop to rancheras. Las Cafeteras use music as a vehicle to build bridges among different cultures and communities, and create "a world where many worlds fit."