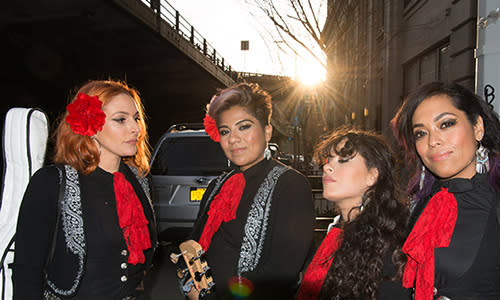 Latin Grammy winning, New York Based all-female ensemble Flor de Toloache continue to win the hearts of both progressive and traditional mariachi music fans alike through their distinct artistic vision and sophisticated, enlightened interpretation of traditional mariachi instruments. The female quartet's diverse ethnicities and musical backgrounds have also transcended culture and gender by forging new paths. Like the legendary Love Potion the Toloache flower is used for in Mexico, the ladies of Flor de Toloache cast a spell over their audiences with soaring vocals and physical elegance. The group is led by co-band directors Mireya I. Ramos on violin and Shae Fiol on vihuela. Together, they have graced international stages from Chennai, India to Paris, France, and have extensively toured the U.S. as supporting act for Dan Auerbach of The Black Keys' new project The Arcs, as well as Cafe Tacvba, La Santa Cecilia, and Natalia Lafourcade.

"There should be fireworks named after this band, for all the intensity and color and life that bursts forth from Flor de Toloache."
—Marisa Arbona-Ruiz, NPR's First Listen 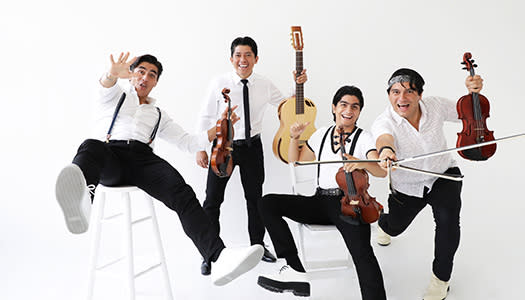 The Villalobos Brothers have been acclaimed as one of today’s leading Contemporary Mexican ensembles. Their original compositions and arrangements masterfully fuse and celebrate the richness of Mexican folk music with the intricate harmonies of jazz and classical music.

The ensemble's virtuosic performances have delighted audiences throughout Latin America, India, Russia, Canada and in more than 30 states across the US. They have performed in historic venues and events including Carnegie Hall, Lincoln Center, the Latin Grammy Awards, Davies Symphony Hall, Montreal Jazz Festival, the Ford Theatre in Hollywood, the 60th Anniversary of the United Nations, the New Victory Theatre on Broadway, San Jose Jazz Fest, Celebrate Brooklyn, the 66th FIFA Congress in Mexico City, the Blue Note Jazz Festival and the Apollo Theatre.

In 2018, they joined forces with Arturo O'Farrill and the Afro Latin Jazz Orchestra for the "Fandango at the Wall" project. This ambitious undertaking, produced by Kabir Sehgal, united legendary international musicians for a live concert at the Tijuana-San Diego border wall.