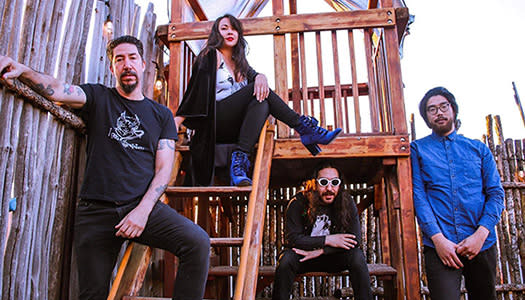 We are pleased to host Red Light Cameras as part of our integrated series at N4th Theatre, where we bring musicians to perform for the artists with developmental disabilities at N4th and invite the community to come join the fun and see the great work they do there. Community spots are limited to 60 people and reservations are required.

Formed in Albuquerque, Red Light Cameras plays a mix of soulful rock and garage pop. The group has been playing since 2010, supporting such acts at Dum Dum Girls, Said the Whale, and Girl in a Coma. Their debut, self-titled album was recorded at ¿Que? Studio in Albuquerque and released in October 2011, garnering them Local iQ's Best Band in Albuquerque.

Red Light Cameras released its follow-up EP For Those Who Favor Fire in 2013, which garnered them a New Mexico Music Award for Best Pop Album of 2013 and a repeat Best Band award from the Local iQ. The band's infectious hooks and bouncing beats are destined to have you on the dance floor, and their high energy performance is sure to keep you coming back for more.