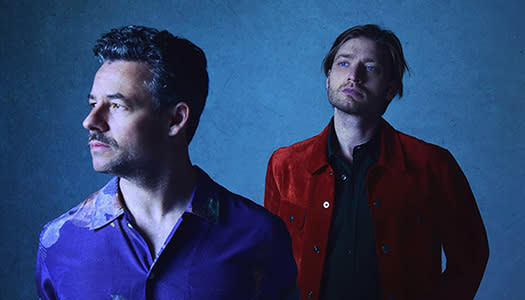 A VIP Tour Package is available for $88 (including all service charges). It includes:

"We stick to the archetypes. A literal world isn't interesting. We're trying to put a skin around the symbols and myths that civilization has told itself for 10,000 years. The better the symbol and the more universal the myth, the more people can create a world for themselves from their memories and desires. That's the goal: Give the audience enough raw material to make the world their own."
—Tyler Lyle of The Midnight

The Midnight, the duo of producer Tim Daniel McEwan and singer-songwriter Tyler Lyle, are masters of flipping the disparate archetypes of yearning American youth—think everything from John Hughes films and the Smashing Pumpkins' "1979" music video to Snapchats of ravers losing it to a big bass drop and the lonesome sway of the "lofi hip hop radio – beats to study / relax to" YouTube channel—into their own modern collage that finds a throughline between generations of teenage ennui.

Their music fuses this Americana with an evocative electronic palette that incorporates synth-driven film scores, dance music, synth-pop, and rock, creating an enveloping harmony of richly textured sonics and poignant lyrical imagery. Each song cultivates a story written on a bedrock of universal themes and eternal hooks, coming together to create a body of work that unifies an enthusiastic global fan base.

Their new album Monsters, a sequel to 2018's Kids and second record in an intended trilogy, finds McEwan and Lyle embracing new sounds while retaining the DNA of what has made them so compelling. There is a balance of the familiar with a drive to elevate the songwriting and the sonic palette into new, exciting areas. This mirrors the transition from being "just a kid" to being a complicated, heart-afire teenager.