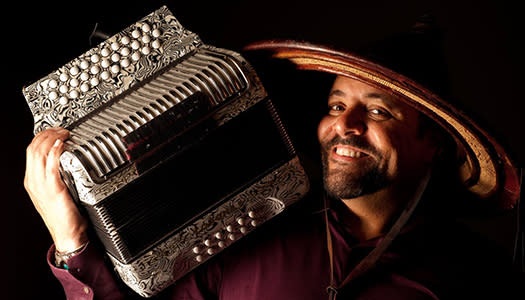 Tickets are $20 in advance, $25 day of show (including all service charges). They are also available by phone through Hold My Ticket at 505-886-1251. 21 and over unless accompanied by parent or legal guardian. Limited seating available.

For 38 years, two-time Grammy award winning artist Terrance Simien, 8th generation Louisiana Creole, has been shattering the myths about what his indigenous Zydeco roots music is—and is not. Leading his Zydeco Experience bandmates—long-time members Danny Williams, keyboards, and Stan Chambers, bass, horn players, Lance Ellis, sax  and Curtis Watson, trumpet, and the newest member (2019), drummer Ian Molinaro-Thompson—Simien has become one of the most respected and accomplished artists in American roots music today. He and his bandmates have performed over 9000 concerts and toured millions of miles to over 45 countries during their eventful career.

In 1983, at the young age of 18, Simien began touring professionally, and by 20 he was sharing the stage with Fats Domino and Sarah Vaughn at the Bern Jazz Festival. His career exploded after that and Terrance remains a pivotal part of Zydeco music history. In the early 1980s there were only 2 emerging bands touring nationally: the young Terrance and The Sam Brothers were the only artists reaching a younger audience with their indigenous roots music. Simien was also vital to the "renaissance" of a genre that was becoming extinct with the passing of each pioneer, starting with Clifton Chenier in 1987. By the end of the 1990s, all of the other influential pioneers had departed. This placed Terrance at the forefront of an exciting period of growth and popularity for this black roots music born in the rural, French-speaking Creole communities of South Louisiana. Some might call him the OG of zydeco! We're def down with that.