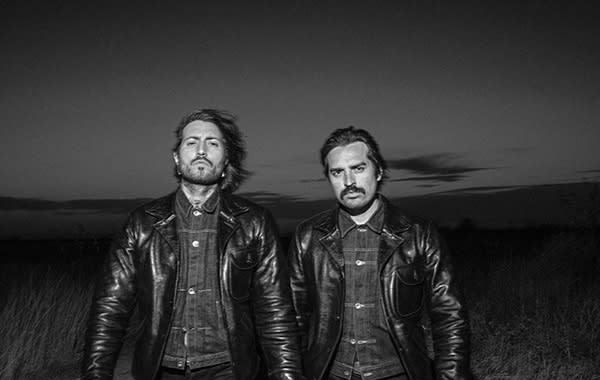 "When Alejandro and I play together, it's like we are driving a car," says Estevan Gutiérrez, one half of the guitar duo Hermanos Gutiérrez. "It's like we are taking a road trip. Sometimes we're driving through a desert. Sometimes we're traveling up the coast. But always we are in nature, and we see the most beautiful landscapes, sunrises, sunsets." The music these two brothers make evokes expansive plains and rough wildernesses, saguaros and surfs, spaghetti westerns and Morricone soundtracks, Lynch and Jarmusch. With their guitars they travel through landscapes haunted by vaqueros, cancioneros, wanderers, fugitives, lovers, family—and whatever ghosts their listeners bring to the music. "Each album is a journey on its own," says Alejandro Gutiérrez. "We just have to go with the music, trust in ourselves, and see where it takes us."

El Bueno Y El Malo is their most epic journey yet: Working with the Black Keys' Dan Auerbach at his Easy Eye Sound Studio in Nashville, they've crafted ten vivid compositions that highlight their intimate guitar playing, where one brother's rhythms and the other brother's melodies twine around each other so that they become inextricable. Together, they generate what Estevan calls a "deeper, darker energy" defined by complex arrangements, sophisticated playing, and most of all their very close relationship. "We have such different personalities and such different approaches," says Alejandro," but in the end we have a strong balance. Because we're brothers and because we love each other, there's always this connection."

The sons of a Swiss father and an Ecuadorian mother, Hermanos Gutiérrez have only been playing together for a few years, but music has always been a point of connection for them. "I started playing guitar because of my brother," Alejandro says. "He was always playing, and I loved the sound of it. Then he went to Ecuador for a year, and as an expression of missing him, I started playing the guitar as well. I learned by trying to imitate other songs, but soon realized that I didn't like playing covers. I wanted to play my own music."